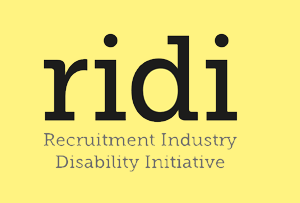 The Recruitment Industry Disability Initiative (RIDI) is an independent not-for-profit group of employers and recruiters that have come together to drive change for disabled people in the UK jobs market. While the initiative aims to remove the barriers faced by the millions of disabled people who are entering or progressing through the UK jobs market, its annual awards celebrate best practice in the inclusion of disabled talent.

In 2015 BlueSky PR was chosen by RIDI Award media sponsor, Guidant Group, which is part of Impellam, to implement and manage a PR campaign to raise awareness of the awards and encourage entries.

We achieved this by offering an innovative pricing model, which includes an element of pro bono from BlueSky, to deliver a hard hitting press campaign. The first stage was a press release outlining the results of a survey undertaken on behalf of RIDI which found that Up to 37% of disabled jobseekers have been discriminated against during the recruitment process. The release highlighted the significant disparity between the perceptions of candidates and recruiters in terms of the provision of ‘reasonable adjustments’ made to accommodate disabled jobseekers – a legal requirement under the Equality Act 2010. Despite the fact that 82% of recruiters claim reasonable adjustments are made to cater for disabled jobseekers, 58% of those candidates say that no such adjustments were made. This launch release was followed by a sustained campaign which included blog outreach opportunities, advice-led thought leadership articles and further statistics-based releases.

Following the success of the 2015 campaign, BlueSky PR was chosen to manage press relations for the 2016 RIDI Awards and we continue to work together today.

What that meant to them

The success of the 2015 campaign to promote the awards resulted in over 50 pieces of coverage in key target HR publications such as Changeboard and Personnel Today as well as national and broadcast media including The Times Diversity at Work supplement and the BBC. Consequently, submissions for the awards increased by 44%.

This success snowballed in 2016 with over 100 pieces of quality press coverage. Thanks to RIDI’s increased exposure, we are now approached by journalists and editors who are looking for insight from RIDI specifically on the issues faced by disabled jobseekers and how these can be overcome.

BlueSky PR was shortlisted and highly commended for Employers Network for Equality and Inclusion (enei) Awards in both 2015 and 2016 in the category of Inclusive Communications. This award recognises achievements in promoting the cause of diversity and inclusion amongst employers.

“Guidant Group has been truly impressed by BlueSky PR’s work so far. The team have an in-depth knowledge of the recruitment sector and its media. They are passionate, hard-working and most importantly they get results! I’d be very happy to recommend them.”  -Alexa Bradbury, Head of Marketing, Guidant Group