The Conservatives and factcheckUK: Using Twitter to Spread Disinformation

A poorly conceived PR stunt, an attempt to mislead the public, or a Machiavellian plan to position Tory MP’s front and centre of the news agenda? Whatever your opinion on the Conservatives’ decision to temporarily rebrand its CCHQ Press Twitter account to ‘factcheckUK’ for the ITV leaders’ debate, it will certainly be remembered as a watershed moment in PR and communications for years to come.

The rebrand – which took place without any prior warning – replaced every single mention of the Conservatives from the CCHQ Press account’s bio and visuals with never before seen factcheckUK branding. This mimicked the appearance of legitimate fact-checking organisations, such as Fullfact and Channel 4’s Factcheck (can you see where they got their inspiration from?).

It is inappropriate and misleading for the Conservative press office to rename their twitter account ‘factcheckUK’ during this debate. Please do not mistake it for an independent fact checking service such as @FullFact, @FactCheck or @FactCheckNI

Under this guise, the Conservatives presented claims made by its leader Boris Johnson as ‘facts’ whilst dismissing Jeremy Corbyn’s remarks as ‘lies’ before brazenly declaring Johnson as the ‘clear winner’ of the head to head debate. It then, amongst a public outcry, rather conveniently changed its account back to CCHQ Press following the debate's conclusion. 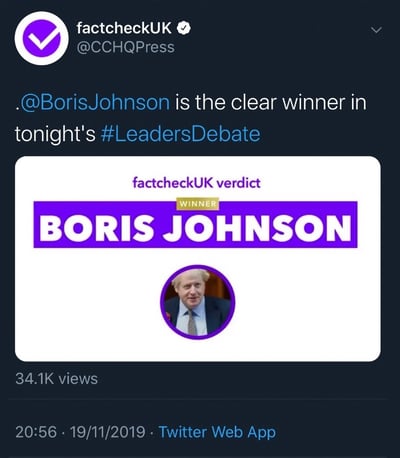 As a social media marketing professional, it filled me with both equal amounts of frustration and anger to witness such an influential medium being used to deceive the public. For me, social media is all about producing content that adds real value to peoples’ lives, whether that is through educating, informing or entertaining them – not as a device to spread propaganda and disinformation.

What makes this situation even more infuriating is Twitter’s reluctance to make an example out of what is a clear breach of the platform’s policies at such a critical moment in UK politics. Rather than removing the account’s verified status, it has decided to only issue a warning by stating that ‘any further attempts to mislead people by editing verified profile information – in a manner seen during the UK Election Debate – will result in decisive corrective action’.

Further complicating the issue are reports that actor Ralf Little has been suspended from Twitter after changing his own account to satirise the Tories’ actions. If this is indeed true, it certainly raises the issue of double standards and whether the social media platform would ever be bold enough to act against a mainstream political party – let alone the UK’s incumbent government.

Thankfully, the move has been condemned by a number of media outlets and organisations including the Chartered Institute of Public Relations (CIPR), a professional body that myself and BlueSky PR as an organisation are committed members of. In a statement, its Chief Executive, Alastair McCapra, said, “The CIPR’s Code of Conduct requires our members to deal honestly and fairly with the public, which is a basic professional standard. This sort of action damages trust, not only in the organisation which carries it out, but potentially in the election itself. Any CIPR members involved in this kind of misleading behaviour face potential disciplinary action under our Code of Conduct.”

With YouGov research revealing that 63% of people in the UK trust social media less than they did just two years ago and 61% stating that social media should be regulated in the same way as traditional media, it is essential that PR and marketing professionals work harder than ever to produce ethical communications if they are to overcome the public’s concerns and establish brand trust.

Are you looking for a reputable agency to manage your company’s PR, marketing or social media activities? Get in touch with BlueSky PR today.

How to view your competitors’ social media ads

Did you know that you can see the social media...

Have you noticed a decline in your recruitment...

Is your recruitment firm struggling to get...

0 thoughts on “The Conservatives and factcheckUK: Using Twitter to Spread Disinformation”