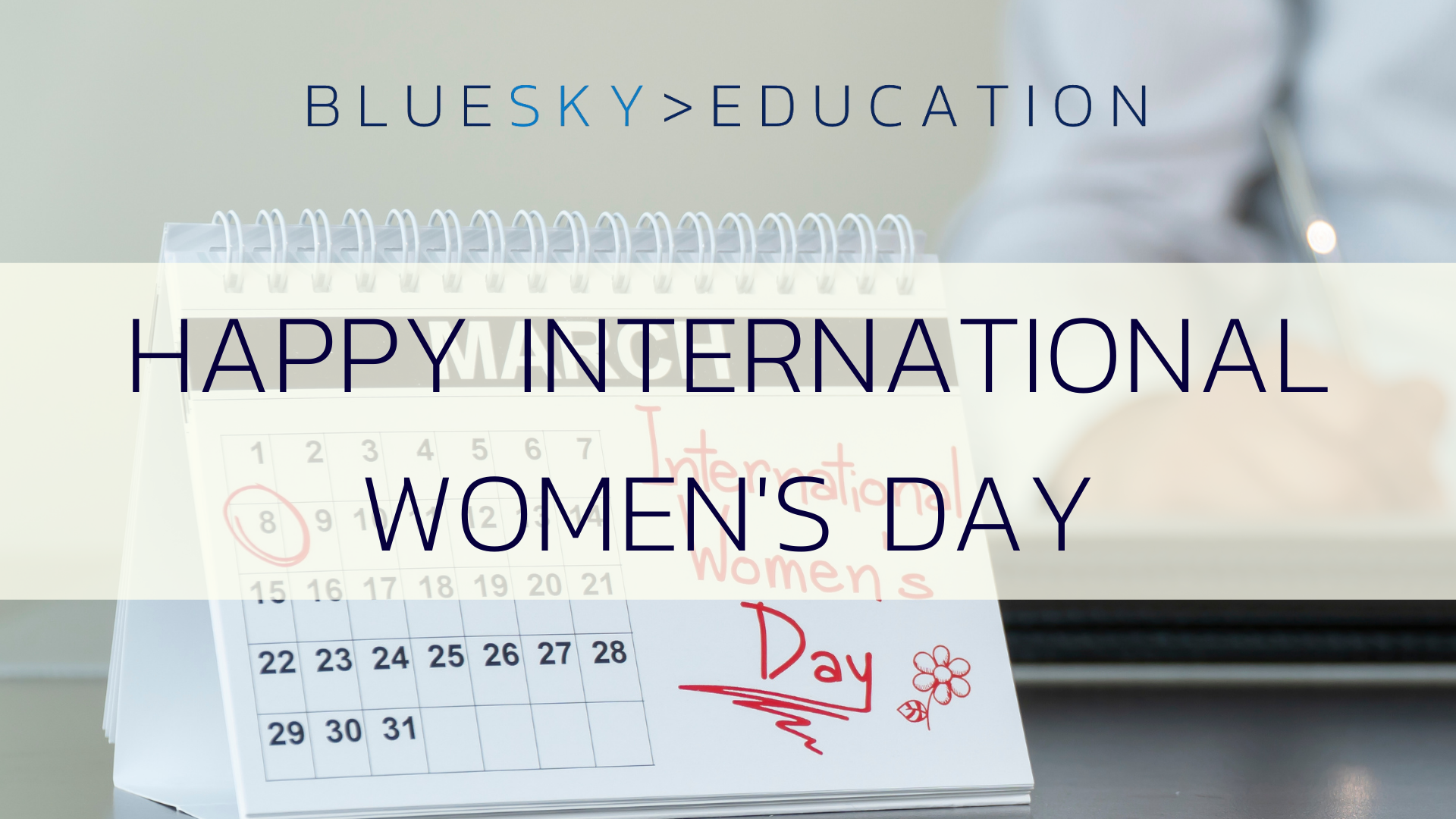 International Women’s Day 2021 – What does it mean to BlueSky Education?

Both personally and professionally, everyone within the BlueSky Education team is inspired by women in one way or another. Whether that’s through communicating with fantastic students, professors, or other members of faculty from the universities and business schools we work with, or from each other within the team.

Myself and the rest of the women at BlueSky Education had the chance to sit down this week and have discussions about what International Women’s Day means for us, and why this day is important.

Katie Hurley said that having the chance to speak to top female academics all over the world is truly inspiring for her every day. She said that a female academic in particular that really stands out for her is Professor Pia Pinger from the University of Cologne and her research about the gender pay gap. Katie said that Professor Pinger’s research impacted her because it revealed how men can expect to earn in 9 years what women expect to earn in their life time – a statistic that has stuck in her mind ever since.

Katie said that Professor Alyssa Schneebaum’s research from from Vienna University of Economics and Business also stands out for her when she thinks about International Women’s Day. This research revealed how globalization can actually provide opportunities for gender equality in the workplace. Katie said that having the opportunity to share important research like this is something she finds invaluable.

As with Katie, I also find the opportunity to promote research around important topics such as gender equality extremely inspirational. I recently had the chance to work with Professors Samia Belaounia, Ran Tao, and Hong Zhao from NEOMA Business School, who’s research found that firms with higher female board representation exhibit higher overall performance, but only if the socio-cultural context allows. This piece of research did very well in the media, highlighting the need for research around topics such as female equality to be promoted.

Shining a spotlight on women in a male dominated environment

At BlueSky Education, we not only have the chance to share academic research, but also the opportunity to share wonderful student and alumni stories. Kerry Ruffle echoed this, saying that when she thinks about International Women’s Day, she thinks about how we have the opportunity to shine a spotlight on many female students who have gone on to form amazing initiatives in traditionally male dominated environments.

Kate Mowbray also resonated with this, sharing that she has been fortunate enough to meet so many women who have inspired her, but two that stick out for her are two graduates from the UCL School of Management. Twins Joyce and Raissa De Haas founded Double Dutch while studying MSc Entrepreneurship at UCL School of Management. They’ve won numerous awards for their innovative and unique premium soft drinks, including the 2014 Virgin Foodpreneur award, and their business has gone from strength to strength.

In recent times, they’ve signed a number deals with food and drink chains in the UK, including Zizzi, as well as vastly increasing the number of bottles they produce and ship worldwide to more than one million per month. They’re also likely to reach more than £3m in revenue too. Kate found these women inspiring as they were so entrepreneurial and managed to be so successful entering a space dominated by men.

Creating an environment where women can be themselves professionally

As well as being proud of the fantastic research, academics, and students we work with, all the women at BlueSky Education are also proud of their own individual career achievements. Steph Mullins is particularly proud of becoming Associate Director of BlueSky Education in the past year, and says that a lot of what she has achieved today was inspired by her parents, who made her realise from a young age that she could achieve anything she wanted career wise, and that being a woman would be a benefit, not a hindrance.

Steph said that she is proud that at BlueSky Education, she has created an environment where women can be themselves professionally whilst working with fantastic universities’ and business schools. We are a strong team of both men and women, and there is no doubt that although International Women’s Day is one day a year, in many ways it is every day at BlueSky Education, as we continue to support, champion, and inspire each other.

0 thoughts on “International Women’s Day 2021 – What does it mean to BlueSky Education?”

Why your recruitment firm should be producing long-form content
22 July 2021
5 ways to achieve work-life balance when working remotely - guest blog
12 July 2021
Communication tips to double your recruitment agency client base
6 July 2021
PR opinions on topics in the business press
26 July 2021
Research that captures the media's attention and why
20 July 2021
How can PR set your brand apart from others?
13 July 2021